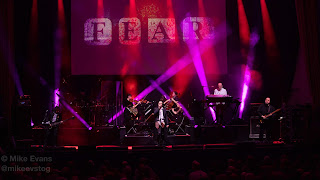 Zeitgeist.
It means Spirit Of  The Times in German.
And who thought it would be a 40 year old band from Aylesbury, England who would be bringing it to the masses in 2019? But here we are, at Cardiff St David's Hall and that band, Marillion, perform a set that says as much about the times in which we live as anything your hip LA Rapper might be pushing out of his Los Angeles penthouse.

The Band are augmented tonight with their 'Friends From The Orchestra' - a string quartet, French Horn player and a Flautist. This worked better in some songs than others but was well worth the effort in the new arrangements.

In Cardiff tonight, the show was being filmed so unauthorised photographs and mobile phones were not allowed. So all photos contained within this blog are from the Bristol show and are courtesy of Photographer extraordinaire, Mike Evans. Unless otherwise stated.

We knew we were in for something a bit special when the opening song was the Epic, Gaza from 2012's Sounds That Can't Be Made. Now this isn't your usual show curtain raiser. A true Prog epic at 18 minutes long, it's a brooding vision of life in that war torn region of Gaza between Palestine and Israel. Not a bundle of laughs, that's for sure and not your traditional show opener either. But it set up the night beautifully for what was going to be a thought provoking, intense and dramatic experience.

Marillion have released 14 albums since Steve Hogarth took over from Fish as lead singer and frontman. And tonight the band chose their set from 8 of those albums. So a good representation of their career up to date.

Next up we have the magnificent Beyond You from Afraid Of Sunlight - I've always thought it was the best song that Talk Talk never recorded. Heavily influenced by Mark Hollis' superb band it's a short glimmer of light in a night dedicated to darker epics. 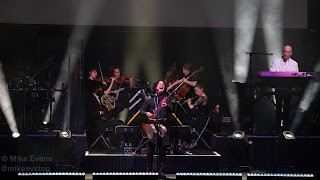 In 1989 - Marillion released their first Post Fish album. They called it Seasons End - the title track is about Climate Change. It's taken the world 30 years to catch up with band. But tonight, it's once again a reflection of a hot topic currently at the forefront of many people's thinking these days. 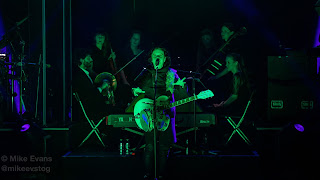 And I must congratulate the Band here for their terrific use of the Back Screen Projections that accompany them throughout the show. A fantastic use of the visual medium to highlight the themes in the show. You'll find a fine example below in the visual that were used in the Seasons End section/

The last time the band played St David's Hall was The Brave Tour - mentioned by Steve Hogarth tonight as being one of the strangest gigs he's ever played. It was also my favourite gig of all time.

The Hollow Man from Brave becomes a powerful response to the politics we now find ourselves having to endure all over the world as images of Putin, Bush, Blair, Cameron, Boris, Trump, Gove and May are projected over the band in ominous 1984esque visuals. 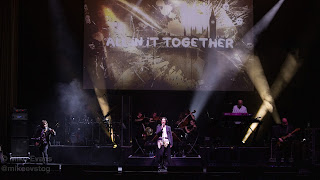 F.E.A.R. - Fuck Everyone And Run was Marillion's absolutely brilliant last album of original songs released in 2016. And one of it's best songs gives Steve Hogarth the chance to give his best animated performance of the evening as the band played the 20 minute Epic, The New Kings is about Russian Oligarchs and people of power taking advantage of the people in terms of using their wealth to forward their own agendas at the expense of ordinary citizens. It generated a standing ovation for the Band. One of many tonight. 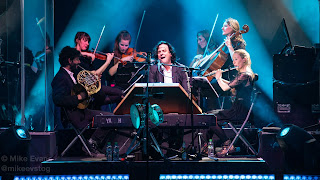 By now we're in need of some love - but in keeping with the theme of the evening, it's not a happy ending as the band turn once again to Sounds That Can't Be Made for the beautifully moving The Sky Above The Rain, with some more gorgeous visuals playing over the Big Screen. It was also a perfect song to showcase the Orchestral players that accompany the band tonight.

The Sky Above The Rain

In 2001 - Marillion released Anaroknophbia - now regarded as one of the pioneers of the Crowd Funded recordings - it gave the band complete artistic and financial control away from record companies and interfering executives. Tonight, the album gives us the final song of the set as the band launch into a high powered version of Separated Out with another terrific visual film accompaniment and a huge cheer when the band included a segment of Led Zeppelin's Kashmir into the mix. 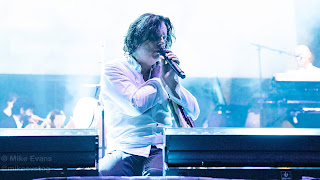 The band left the stage to a huge standing ovation and were soon back out to milk the applause.
The first encore belonged to the Band's 2004 album, Marbles.

Another huge Epic - Ocean Cloud is first up as the band move up to an even higher level to tell this story of Transatlantic heroism.

We are then brought gently back down to terra firma with the beautiful Some Fantastic Place with the Friends Of The Orchestra providing suitably swirling colour to the gentle yearning voice of Steve Hogarth. Another standing ovation follows and the band leave the stage once again. By now we have had over 2 hours of incredible music.

But..... we were treated to one more song. And one more Epic to finish off a night of Epic proportions.
We head back into 1997 to the magnificent album and it's title track, This Strange Engine as H straps on this cricket bat keyboard we're off and running in a show closing classic. 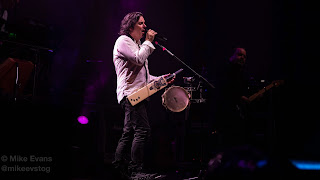 It was a show where Marillion showed just how good they were. Still a force to be reckoned with 40 years later. Still relevant. Still producing beautifully epic and intimate music. They still have their finger on the pulse of what;s going on around them. And still have the ability to produce a magnificent s[spectacle of a performance. And their fan still love them with a passion. For a band in 2019 - what more could you want or ask for?

For thirteen years the roads have all been closed
We're isolated. We're denied medical supplies
Fuel and work are scarce. They build houses on our farms
The old men weep. The young men take up arms.