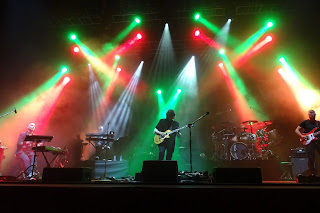 It's been two long years since I saw Steve Hackett. Fresh out of the lockdown Hell, it was my first Major Gig since lockdown and I was interested to see how it would play out at St David's Hall.
On entry we were told that masks were optional so I just carried on as normal - maskless.
The 2021 line up of Steve's band are Nad Sylvan back on Lead Vocals, stalwarts Rob Townsend on Woodwind, Sax, Keyboards and backing vocals and Roger King on Keyboards with Jonas Reingold returning on Bass, Guitars and Backing Vocals and this season we have Craig Blundell on Drums
Having just released his latest solo album - Surrender Of Silence - Steve takes to the road once more with sold out venues proving that this veteran Progger can still pull a crowd and make challenging and delicate music this far into his career while his former band Genesis are just about to embark on a Farewell Tour.
As usual these days Steve splits his show into two halves, Solo Steve and then the Genesis material. And on this tour we are treated to the last Genesis album that Steve ever appeared on - the 1977 live album Seconds Out. 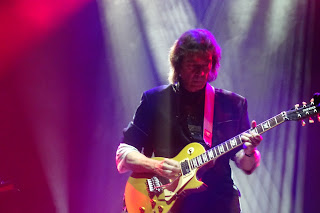 To roaring applause and a cloud of dry ice the band took to the stage and immediately you knew something special was about to happen. You could feel the energy in the air as the hundreds of audience members were obviously, excited, relieved and enthralled at the prospect of one of Prog's big boys returning to live music and I think that this transferred to the band. And more to the point, to Steve himself as tonight he was the most animated and thrilled as he joked with the band all night and displayed and obvious relief at having the chance to play live again.
The band, minus Nad, launched into the instrumental Tour De Force that is Clocks (Angel Of Mons).
With a few gigs now under their belt on this tour,  the band showed no sound of being ring rusty and the musicianship of a band at the peak of their powers was as clear as day.
Clocks (Angel Of Mons)
The crowd erupted at the end of Clocks and you could feel the relief and joy as hundreds of people were brought together once more to experience the joy and majesty of live music.
I only hope that the Elbow crowd who were at the Cardiff Motorpoint Arena were having the same experience as the St David's crowd. I'm sure they did.
Nad Sylvan walked on to the stage to a fabulous ovation and I felt so pleased for the man who had had to carry the weight of Peter Gabriel and Phil Collins on his slender shoulders so so many years now. A solo tour of this own splendid body of work can't be far away now, surely? 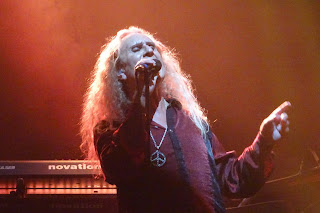 Steve uses the truncated first half - due to the length of the Seconds Out set, as an opportunity to unveil two new songs and first up is Held In The Shadows. Like all brand new tracks the new music needs time to grow and a lot of the audience had probably not heard it due to the recent date of release but this and the other new song, The Devil's Cathedral, with it's eerie church organ were received with appreciative applause from the crowd.
The fisrt half also included the evergreen Everyday which always gets a virtual hug from the crowd like the appearance of a very old friend. It's an excellent rendition and gets an excellent ovation.
Part One ends with Steve going back to his first solo album from 1975, Voyage Of The Acolyte for the epic Shadow Of The Hierophant. This got he audience on their feet and was the perfect warm up to Part Two of the show, which gives us the Seconds Out album - in it's entirety. 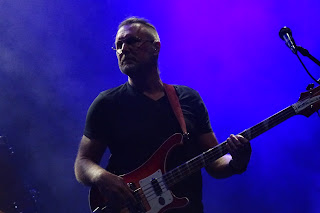 Shadow Of The Hierophant
After half time it was right into the jewel that remains one of my All Time favourite live albums and for a lot of people their first introductions to those older genesis classics, 1977's Seconds Out.
Now the absolutely fabulous twist in this show is that the truncated versions that appear on the original Seconds Out are reinstated to their full glory.
Now I'm not going to insult your intelligence by running down each track from that album - see the back cover!! 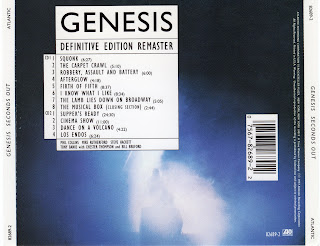 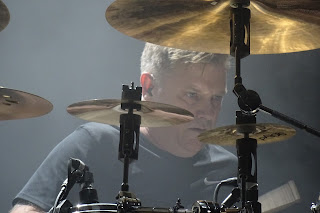 Squonk
It's the part of the show that the Cardiff crowd have been waiting for and from the very first notes of Squonk the band had the crowd in the palm of their hands.
Tonight was all about the music.
Nad was at his most demure with no props, costume changes and playing it straight down the line. It was the first time I had seen him in this mode and I was mightily impressed. He always has been a major part of the Genesis Revisited experience and his certainly showed his worth tonight in an understated and controlled performance, only breaking that rule for the theatrical performance that Phil Collins invented for Robbery, Assault and Battery, which took a life of it's own on this tour. Fabulous stuff indeed. 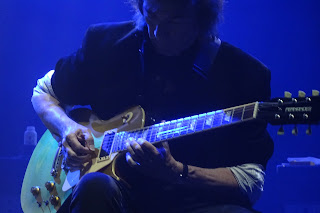 The always reliable Roger King and Rob Townsend sparkled in their performances as they wove their pieces around Steve's guitar work. Rob especially taking the opportunity to improvise around the themes for many of tonight's songs which just added to the interest for me. 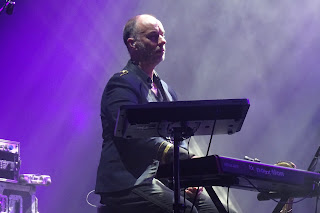 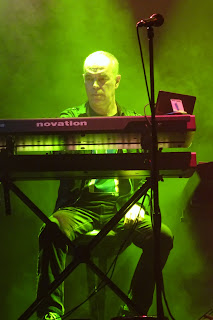 So many highlights of tonight's show it would be unjust to pick out any song in particular although the crowd response to The Musical Box and Supper's Ready said it all with minutes worth of standing ovations. 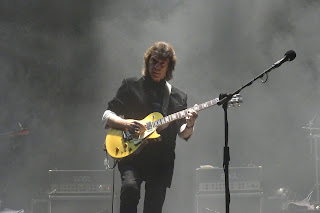 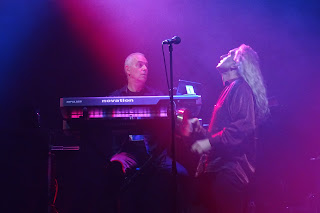 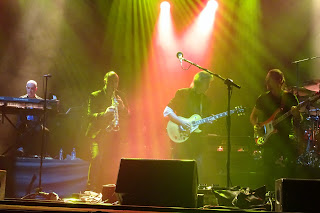 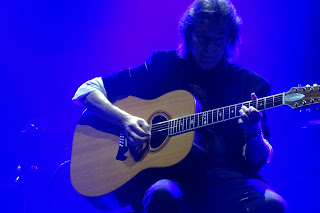 Craig Blundell, fresh from his live work with Steven Wilson and Jonas Reingold returning were the glue that held together the sound in tonight's epic performance. Both outstanding musicians in their own right it was if they had been playing together for years. 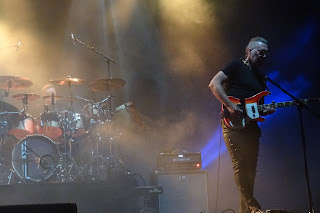 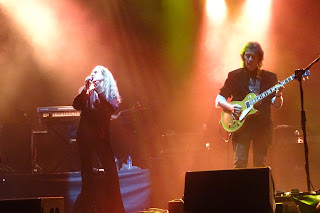 And as for Mr Hackett himself, how he keeps looking so young is a matter of much speculation, paintings in attics being top amongst the theories that abound but he really was the most focused, inventive, enthused and yes, happy, that I've seen him for many a year. The audience just adores him. 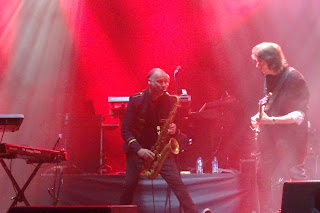 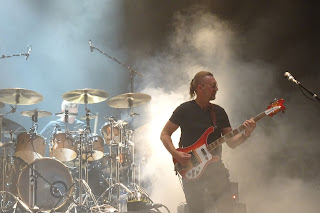 There has always been a vicious rumour circulating that as Steve walked away from Genesis during the mixing for Seconds Out the band took the opportunity to mix him down to a minimum in the album. I don't know if this is true but I know that he IS so far down in the mix that you can hardly hear his fabulous guitar work on that tour in 1976.
But, with this performance he really managed to show how inventive and delicate his guitar work really is. This night gave the audience a chance to hear Seconds Out as the album it SHOULD have been. I could not be more grateful that I got a chance to hear it live from the front row.
I have never made it a secret that I believe that when Steve walked away from the band he took the Soul out of Genesis. For me, he took the delicacy, invention and English quirkiness that was the Soul of early Genesis. Just listen to the diverse nature of his first solo album, Please Don't Touch, to see what the band lost. They may have gained in popularity and fame but what they lost in inventiveness is incalculable.
Genesis may well be playing their final gigs in the coming weeks but for me Steve is the torch carrier.
Now if we can just convince him to play the Tony Banks heavy, Trick Of The Tail album in it's entirety. 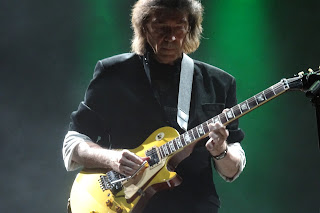 Email ThisBlogThis!Share to TwitterShare to FacebookShare to Pinterest
Labels: Live in 2021